The eastern United States, from the Canada-US border in the north to northern Florida in the south, shows clearly in this true-color Terra MODIS image from April 13, 2003. Ice and snow had finally retreated from the region with the onset of spring, though plant life was only newly awakened. Running diagonally southwest through the image are the Appalachian Mountains, which appear as ribbons of brownish-red against the green plants. Out in the Atlantic, the Gulf Stream is visible as a wide streak of lighter blue against the normal deep blue water. The Gulf Stream is a warm, relatively fast-moving current of water that is born in the Gulf of Mexico and flows all the way to the UK and western Europe, influencing climate all along the way.
Source: Jeff Schmaltz, MODIS Rapid Response Team, NASA/GSFC 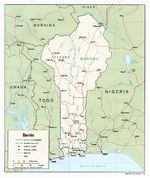