These radar images show two segments of the Great Wall of China in a desert region of north-central China, about 700 kilometers (434 miles) west of Beijing. The wall appears as a thin orange band, running from the top to the bottom of the left image, and from the middle upper-left to the lower-right of the right image. These segments of the Great Wall were constructed in the 15th century, during the Ming Dynasty. The wall is between 5 and 8 meters high (16 to 26 feet) in these areas. The entire wall is about 3,000 kilometers (1,864 miles) long and about 150 kilometers (93 miles) of the wall appear in these two images. The wall is easily detected from space by radar because its steep, smooth sides provide a prominent surface for reflection of the radar beam. Near the center of the left image, two dry lake beds have been developed for salt extraction. Rectangular patterns in both images indicate agricultural development, primarily wheat fields. The images were acquired by the Spaceborne Imaging Radar-C/X-Band Synthetic Aperture Radar (SIR-C/X-SAR) onboard the space shuttle Endeavour on April 10, 1994. SIR-C/X-SAR, a joint mission of the German, Italian and the United States space agencies, is part of NASAs Mission to Planet Earth. The left image is centered at 37.7 degrees North latitude and 107.5 degrees East longitude. The right image is centered at 37.5 degrees North latitude and 108.1 degrees East longitude. North is toward the upper right. Each area shown measures 25 kilometers by 75 kilometers (15.5 miles by 45.5 miles). The colors in the image are assigned to different frequencies and polarizations of the radar as follows: red is L- band horizontally transmitted, horizontally received; green is L- band horizontally transmitted, vertically received; blue is C-band horizontally transmitted, vertically received.
Source: NASA JPL 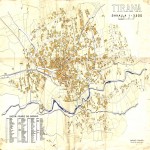 Map of Harz Mountains from Osterode to the Brocken, Germany 1910