This spaceborne radar image shows the intensive agricultural development in central Ukraine, along the Dnieper River. The area shown lies about 320 kilometers (198 miles) southeast of Kiev and about 360 kilometers (223 miles) northeast of Odessa. Central Ukraine is a rich agricultural region, producing primarily wheat and other grains. In this radar image taken in the early spring, most of the fields do not have active crops, so their relatively smooth texture results in dark shades of brown and purple. Boundaries between the fields consist of hedges or trees which appear as bright outlines. The bright yellowish areas along the river are riparian (riverbank) forest. The small tributary that flows into the Dnieper from the right side of the image is the Volchya River. Radar images can be used to map crop types, to monitor the health of crops, and to predict yields. This image was acquired by Spaceborne Imaging Radar-C/X-Band Synthetic Aperture Radar (SIR-C/X-SAR) onboard the space shuttle Endeavour on April 15, 1994. The image is 45 kilometers by 35 kilometers (28 miles by 22 miles) and is centered at 49.0 degrees North latitude, 34.1 degrees East longitude. North is toward the upper right. The colors are assigned to different radar frequencies and polarizations of the radar as follows: red is L- band, horizontally transmitted and received; green is L-band, horizontally transmitted, vertically received; and blue is C- band, horizontally transmitted, vertically received. SIR-C/X-SAR, a joint mission of the German, Italian, and United States space agencies, is part of NASAs Mission to Planet Earth.
Source: NASA JPL 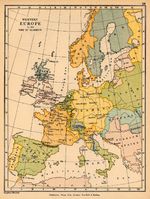 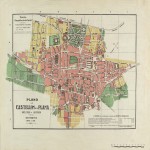