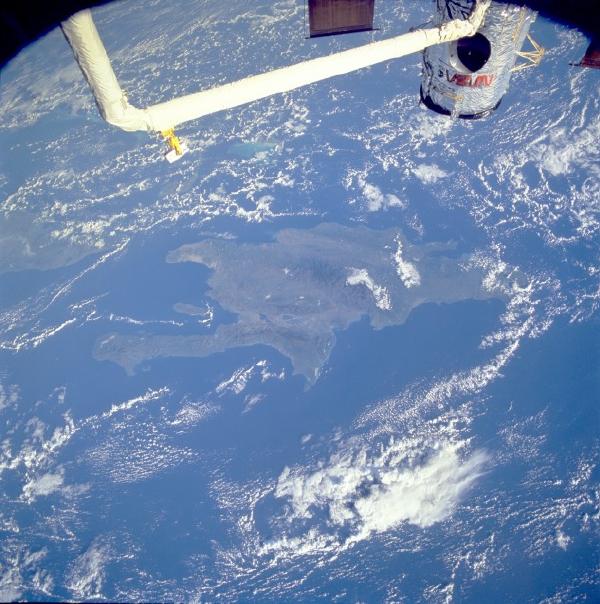 Hispaniola (Isla de Santo Domingo), Greater Antilles December 1993. This low-oblique, north-looking photograph provides an excellent view of Hispaniola—discovered by Christopher Columbus in 1492—the second-largest island in the West Indies. Situated between Cuba and Puerto Rico (to the west and east, respectively) and the Atlantic Ocean and the Caribbean Sea (to the north and south, respectively), Hispaniola covers 29 530 square miles (76 480 square kilometers). Two main features of this mountainous terrain are the Cordillera Central, the backbone of Hispaniola, and the Enriquillo, a cul-de-sac depression. The Cordillera Central, formed from a checkered array of volcanic, metamorphic, and sedimentary rocks, presents a maze of peaks and ridges with flat-bottomed intermontane valleys. Its highest peak rises 10 417 feet (3177 meters) in the east-central part of the island. The Enriquillo, a rift valley that was once a maritime strait, has some interior dry surface below sea level that is covered by large salt lakes such as Lago de Enriquillo and Etang-Saumâtre. The first New World settlement was established in 1493 near the modern city of Cap-Haïtien, Haiti, on the north coast. With the island’s subtropical climate and abundant year-round rainfall, agriculture (coffee, cocoa, and sugarcane) flourishes..
Source: National Aeronautics and Space Administration - NASA/JPL/NIMA 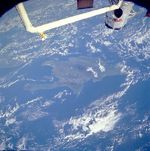 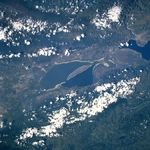 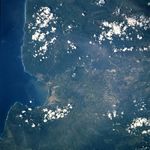 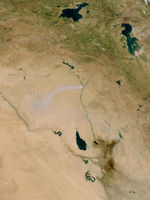