Caliphate of Córdoba, circa 1000

The Caliphate of Córdoba (Arabic: ????? ????? Khilafat Qur?uba) ruled the Iberian peninsula (Al-Andalus) and North Africa from the city of Córdoba, from 929 to 1031. This period was characterized by remarkable success in trade and culture; many of the masterpieces of Islamic Iberia were constructed in this period, including the famous Great Mosque of Córdoba. In January of 929, Abd-ar-Rahman III proclaimed himself Caliph (Arabic: ?????) of Córdoba in place of his original title Emir of Córdoba (Arabic: ???? ????? 'Amir Qur?uba). Abd-ar-Rahman III was a member of the Umayyad dynasty; the same dynasty who held the titles of Emir of Córdoba since 756. The rule of the Caliphate is known as the heyday of Muslim presence in the Iberian peninsula. The Caliphate was practically disintegrated due to civil war (fitna) between descendants of the last legitimate Caliph Hisham II and the successors of his prime minister (hayib) Al-Mansur. The shell of the Caliphate existed until 1031 when, after years of infighting, it fractured into a number of independent Taifa kingdoms.
Source: owje.com 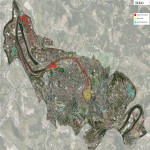 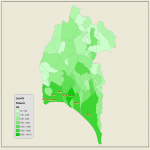 Population of province of Huelva 2007