This spaceborne radar image shows part of the British territory of Hong Kong, adjacent to mainland China. The South China Sea is shown in dark blue and red on the image. Land surfaces are seen in shades of lighter blue and gold, including Hong Kong Island in the lower center, the Kowloon Peninsula in the upper right and many other small islands. The brightest yellow areas are the densely developed areas of Hong Kongs business and residential districts. The small yellow dots in the water are the many ships that make Hong Kong one of the busiest seaports in the Far East. Images such as this can be used by land-use planners to monitor urban development and its effect on the tropical environment. The image was acquired by the Spaceborne Imaging Radar-C/X-band Synthetic Aperture Radar (SIR-C/X-SAR) onboard the space shuttle Endeavour on October 10, 1994. The image is 23 kilometers by 31 kilometers (14 miles by 19 miles) and is centered at 22.3 degrees north latitude, 114.1 degrees east longitude. North is toward the upper right. The colors are assigned to different radar frequencies and polarizations of the radar as follows: red is L-band, vertically transmitted and received; green is C-band, vertically transmitted and received; and blue is C-band minus L-band, both vertically transmitted and received. SIR-C/X-SAR, a joint mission of the German, Italian and United States space agencies, is part of NASAs Mission to Planet Earth.
Source: NASA JPL 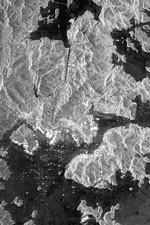 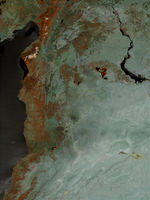 Northern Syria (before collapse of the Zeyzoun Dam) 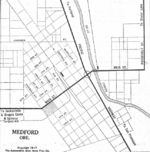 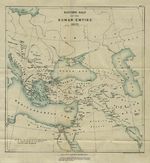 Eastern Half of the Roman Empire