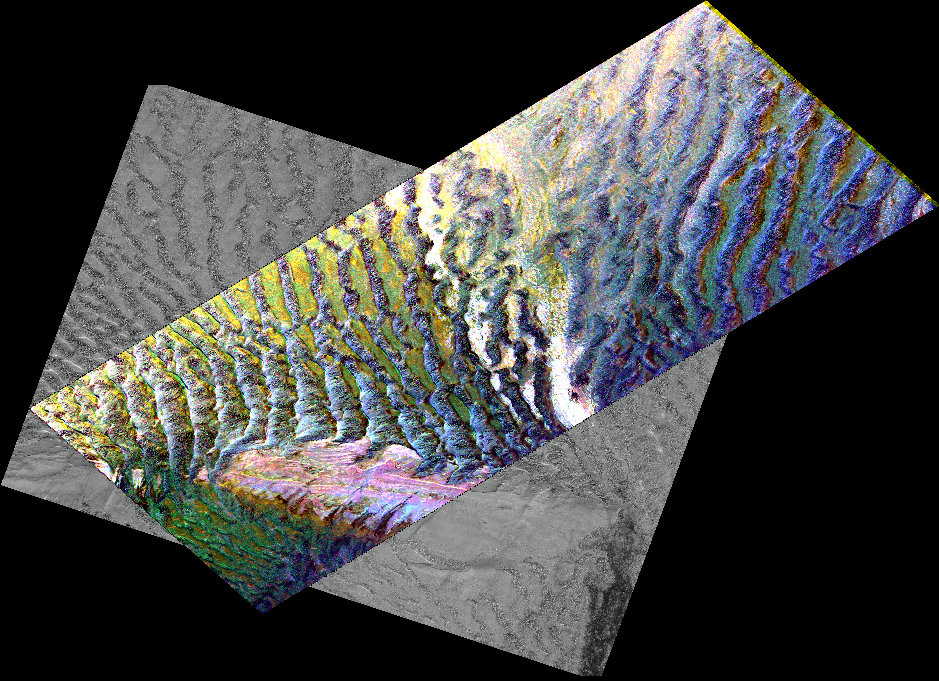 This composite image is of an area thought to contain the ruins of the ancient settlement of Niya. It is located in the southwest corner of the Taklamakan Desert in Chinas Sinjiang Province. This region was part of some of Chinas earliest dynasties and from the third century BC on was traversed by the famous Silk Road. The Silk Road, passing east-west through this image, was an ancient trade route that led across Central Asias desert to Persia, Byzantium and Rome. The multi-frequency, multi-polarized radar imagery was acquired on orbit 106 of the space shuttle Endeavour on April 16, 1994 by the Spaceborne Imaging Radar-C/X-band Synthetic Aperture Radar. The image is centered at 37.78 degrees north latitude and 82.41 degrees east longitude. The area shown is approximately 35 kilometers by 83 kilometers (22 miles by 51 miles). The image is a composite of an image from an Earth-orbiting satellite called Systeme Probatoire dObservation de la Terre (SPOT) and a SIR-C multi-frequency, multi-polarized radar image. The false-color radar image was created by displaying the C-band (horizontally transmitted and received) return in red, the L-band (horizontally transmitted and received) return in green, and the L-band (horizontally transmitted and vertically received) return in blue. The prominent east/west pink formation at the bottom of the image is most likely a ridge of loosely consolidated sedimentary rock. The Niya River -- the black feature in the lower right of the French satellite image -- meanders north-northeast until it clears the sedimentary ridge, at which point it abruptly turns northwest. Sediment and evaporite deposits left by the river over millennia dominate the center and upper right of the radar image (in light pink). High ground, ridges and dunes are seen among the riverbed meanderings as mottled blue. Through image enhancement and analysis, a new feature probably representing a man-made canal has been discovered and mapped. Spaceborne Imaging Radar-C and X-band Synthetic Aperture Radar (SIR-C/X-SAR) is part of NASAs Mission to Planet Earth. The radars illuminate Earth with microwaves, allowing detailed observations at any time, regardless of weather or sunlight conditions. SIR-C/X-SAR uses three microwave wavelengths: the L- band (24 cm), C-band (6 cm) and X-band (3 cm). The multi- frequency data will be used by the international scientific community to better understand the global environment and how it is changing. The SIR-C/X-SAR data, complemented by aircraft and ground studies, will give scientists clearer insights into those environmental changes which are caused by nature and those changes which are induced by human activity. SIR-C was developed by NASAs Jet Propulsion Laboratory. X-SAR was developed by the Dornier and Alenia Spazio companies for the German space agency, Deutsche Agentur fuer Raumfahrtange legenheiten (DARA), and the Italian space agency, Agenzia Spaziale Italiana (ASI), with the Deutsche Forschungsanstalt fuer Luft und Raumfahrt e.v.(DLR), the major partner in science, operations and data processing of X-SAR.
Source: NASA JPL 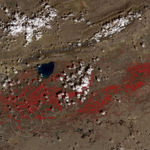 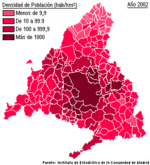 Population of the Community of Madrid 2002