This radar image of Lisbon, Portugal illustrates the different land use patterns that are present in coastal Portugal. Lisbon, the national capital, lies on the north bank of the Rio Tejo where the river enters the Atlantic Ocean. The city center appears as the bright area in the center of the image. The green area west of the city center is a large city park called the Parque Florestal de Monsanto. The Lisbon Airport is visible east of the city. The Rio Tejo forms a large bay just east of the city. Many agricultural fields are visible as a patchwork pattern east of the bay. Suburban housing can be seen on the southern bank of the river. Spanning the river is the Ponte 25 de Abril, a large suspension bridge similar in architecture to San Franciscos Golden Gate Bridge. The image was acquired on April 19, 1994 and is centered at 38.8 degrees north latitude, 9.2 degrees west longitude. North is towards the upper right. The image is 50 kilometers by 30 kilometers (31 miles by 19 miles). The colors in this image represent the following radar channels and polarizations: red is L-band, horizontally transmitted and received; green is L-band, horizontally transmitted and vertically received; and blue is C-band, horizontally transmitted and vertically received. SIR-C/X-SAR, a joint mission of the German, Italian, and the United States space agencies, is part of NASAs Mission to Planet Earth.
Source: NASA JPL 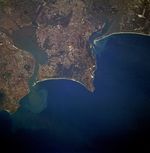 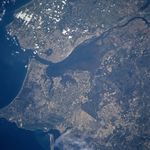 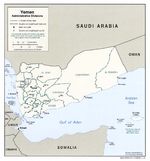