California Wildfires as Seen From the Space Shuttle

Yosemite Fires (1.0 MB) After undocking with Space Station Alpha, on August 20, 2001, astronauts on the Space Shuttle photographed wildfires burning in the western U.S. using a digital camera. With a shorter lens, astronauts recorded the regional view at top, showing the smoke around the California Central Valley blowing into Nevada. Zooming in with a longer lens length, astronauts recorded details of individual fires. The digital images were then downlinked to the ground. The Trough Fire (middle), burning in Mendocino National Forest was 76 percent contained and had burned 16,751 acres at the time the photo was taken. The Hoover Complex Fire had burned 3,750 acres in Yosemite National Park and was not threatening structures or communities at the time the photo was taken. The Creek wildfire covered approximately 6,700 acres and was 50 percent contained. It threatened the towns of Groveland and Big Oak Flat and had spread into Stanislaus National Forest. The Leonard Fire, also near Stanislaus National Forest, covered 2,455 acres and was 20 percent contained. Information on fire status and locations was obtained from the National Fire Interagency Center and U.S. Forest Service Detailed Fire Intelligence. For a map of fires in California in July and August, developed from MODIS data, see the FireMapper site. Another image of the fires seen from NOAAs AVHRR satellite is also available from the Operational Significant Event Imagery team.
Source: Photographs STS105-E-5421, 5416, 5417 were taken from the Space Shuttle on August 20, 2001. Provided by the Earth Sciences and Image Analysis Laboratory at Johnson Space Center. Additional images taken by astronauts and cosmonauts can be viewed at the NAS 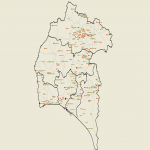 Towns and villages of the province of Huelva 2008 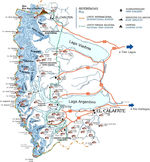