For three quarters of the year Alaska sleeps under the cover of snow and ice, from the Point Barrow in the north to the Panhandle region in the southeast, the Canadian Yukon Territory border in the east to the Seward Peninsula in the northwest. At almost 1/5th the size of the rest of the United States, that means that snow and ice cover over 1.7 million square kilometers (almost 657 million sq mi) of land. In this true-color Aqua MODIS image from March 8, 2004, winter is slowly releasing its grasp, though the advent of the short, but intense, Alaskan summer is still three months away. During that time, plants must awaken, grow, and reproduce sufficiently to last them through another cold season. Animals either come out of hibernation or migrate north as the snow line recedes, and they too must reproduce and grow sufficiently to survive in this brief span of time. The Chukchi Sea (upper left corner) appears to be completely covered in sea ice. The Brooks Range, which runs across the northern part of the state to the Canadian border in the east, runs in a broad snow-covered stripe, dividing arctic Alaska from the more temperate interior. The mighty Yukon River appears as a bright white ribbon snaking its way across the interior for 1200 miles. In the south, snows cover the higher altitudes of the Aleutian Range (bottom center edge), and all of the Alaska Range (north of the Aleutians).
Source: Jeff Schmaltz, MODIS Rapid Response Team, NASA/GSFC 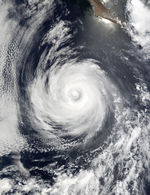 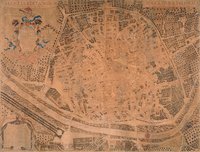