Quebec glow brilliantly green in this true-color Terra MODIS image acquired August 23, 2002. Lac St-Jean (top center) and the St. Lawrence Bay (upper right). At the innermost point of the St. Lawrence is the city of Quebec, which appears as a gray splotch against the deeper green of the surrounding vegetation. Connected to the St. Lawrence Bay is the St. Lawrence Seaway, which passes the city of Montreal (lower left center), and eventually connects to Lake Ontario (lower left corner). To the north of Lake Ontario is the province of Ontario; while to the east and south is the northern United States. Specifically, New York State sits on Lake Ontario and also lays claim to most of Lake Champlain (bottom center). Progressing eastward from New York are the states of Vermont, New Hampshire, and Maine. To the east of Maine is Canada's New Brunswick province, and just barely visible at the bottom right corner of the image is the peninsular province of Nova Scotia.
Source: Jacques Descloitres, MODIS Land Rapid Response Team at NASA Goddard Space Flight Center 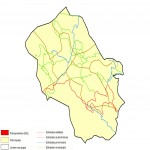