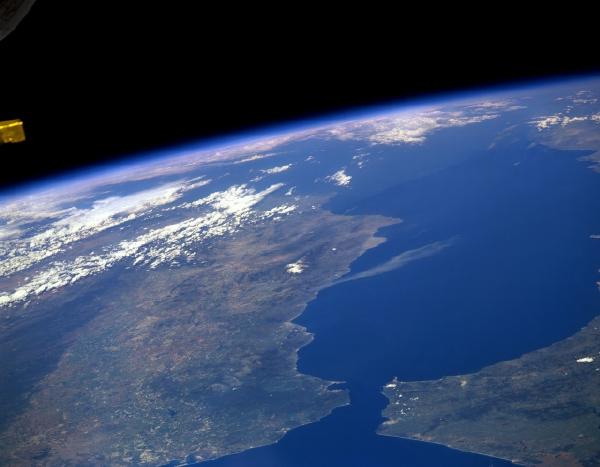 The Strait of Gibraltar (bottom center), the only opening between the Mediterranean Sea (right center) and the Atlantic Ocean, is not only narrow (10 miles-16 km) in width but shallow (1300 feet-396 meters) as well. The northern peninsula of Morocco (lower right) extends northward towards the southwest coast of Spain. The strait locates where the two tectonic plates of Eurasian (north) and Africa (south) collide. Immediately east of the strait is the Alboran Sea (western extension of the Mediterranean Sea), a name given to the body of water between Spain and Morocco. A single atmospheric cloud (light-colored feature), probably smoke, is visible over the Alboran Sea as it extends southward from the south central coast of Spain. The darker landscapes in Morocco and Spain show the location of the vegetated, mountainous regions. The snow covered, higher elevations (maximum elevation 11421 feet-3481 meters) of the Sierra Nevada (Spain) are also visible near the center of the image. An extensive plains region (lighter-colored land corridor in lower left quadrant of image), known as the Andalusian Plains extends southward from the Guadalquivir River Valley. An abrupt color change near the lower left margin of the image is the result of an extensive, east-west trending fault that forms the northern boundary of the Guadalquivir River Valley.
Source: NASA - National Aeronautics and Space Administration 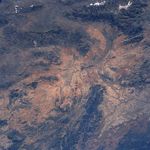 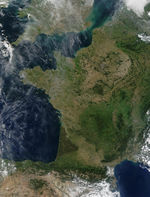 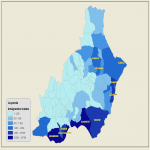 Immigrants in the province of Almeria 2007