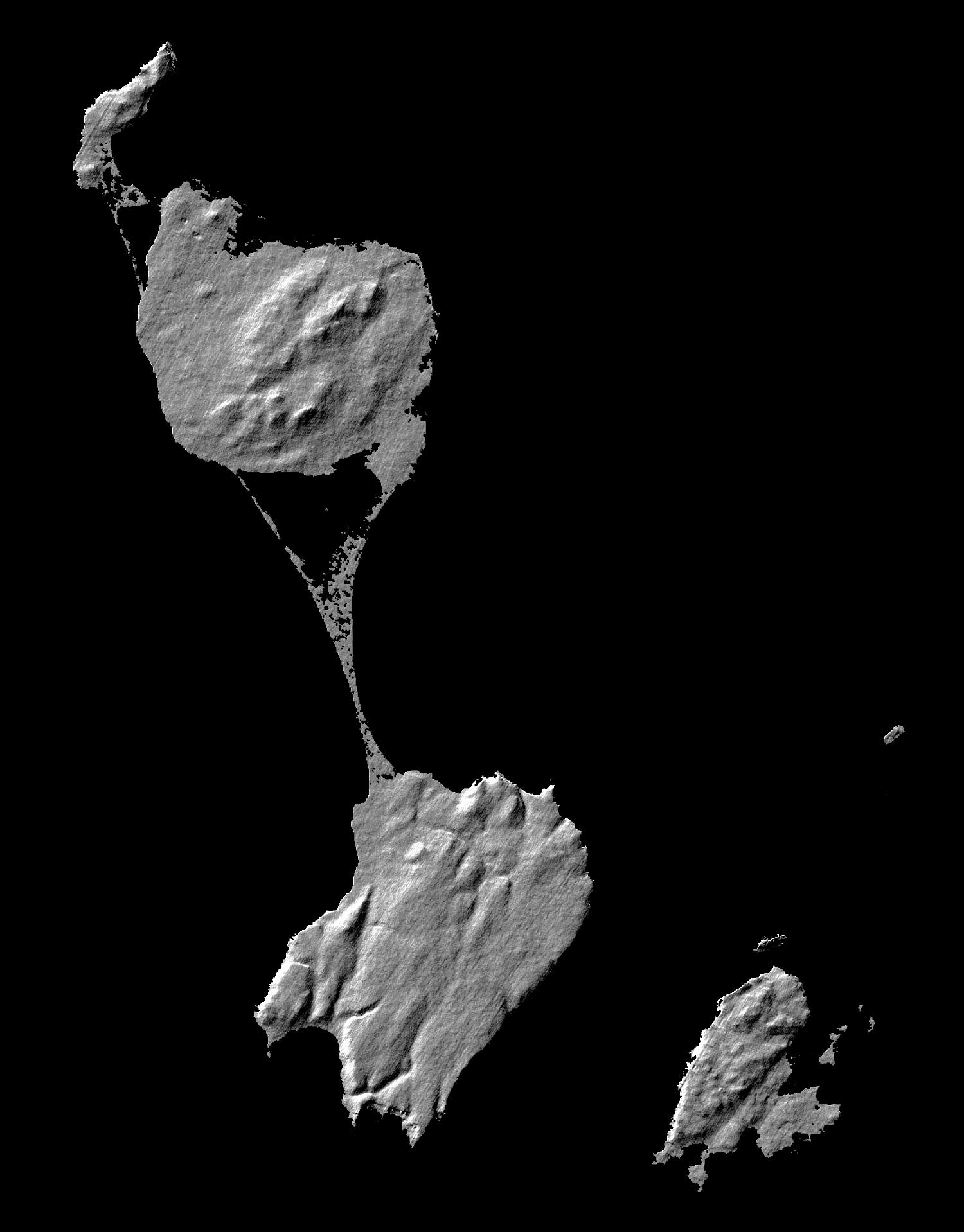 This image shows two islands, Saint-Pierre and Miquelon, located south of Newfoundland, Canada. These islands, along with five smaller islands, are a self-governing territory of France. A thin barrier beach divides Miquelon, with Grande Miquelon to the north and Petite Miquelon to the south. Saint Pierre Island is located to the lower right. With the islands' location in the north Atlantic Ocean and their deep water ports, fishing is the major part of the economy. The maximum elevation of the island is 240 meters (787 feet). The land mass of the islands is about 242 square kilometers, or 1.5 times the size of Washington DC. This shaded relief image was generated using topographic data from the Shuttle Radar Topography Mission. A computer-generated artificial light source illuminates the elevation data to produce a pattern of light and shadows. Slopes facing the light appear bright, while those facing away are shaded. On flatter surfaces, the pattern of light and shadows can reveal subtle features in the terrain. Shaded relief maps are commonly used in applications such as geologic mapping and land use planning. This image was acquired by the Shuttle Radar Topography Mission (SRTM) aboard the Space Shuttle Endeavour, launched on Febuary 11, 2000. SRTM uses the same radar instrument that comprised the Spaceborne Imaging Radar-C/X-Band Synthetic Aperture Radar (SIR-C/X-SAR) that flew twice on the Space Shuttle Endeavour in 1994. The mission is designed to collect three-dimensional measurements of the Earthms surface. To collect the 3-D data, engineers added a 60-meter-long (200-foot) mast, installed additional C-band and X-band antennas, and improved tracking and navigation devices. The mission is a cooperative project between the National Aeronautics and Space Administration (NASA), the National Imagery and Mapping Agency (NIMA) of the U.S. Department of Defense (DoD), and the German and Italian space agencies. It is managed by NASAms Jet Propulsion Laboratory, Pasadena, CA, for NASA's Earth Science Enterprise, Washington, DC.
Source: National Aeronautics and Space Administration - NASA/JPL/NIMA