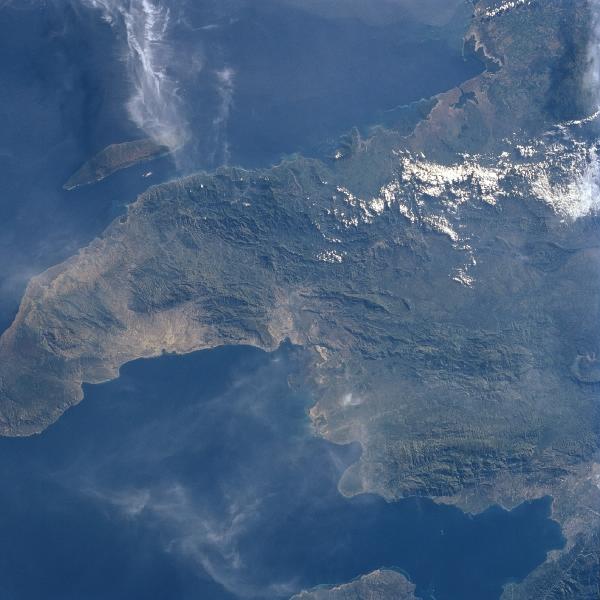 Gulf of Gonave, Haiti July 1997. The northwest peninsula of Haiti and the Gulf of Gonave are visible in this northeast-looking view. The Gulf of Gonave is situated in the pincers of two mountainous peninsulas, and is considered one of the most beautiful in the world. Haiti, an Aboriginal Indian term, means “Land of Mountains”. The mountains of the north, visible on this image, are made up of exposed limestone, which forms the terrain of the region. The porosity of the limestone prevents the formation of natural water reservoirs and facilitates run-off of rivulets, which denude the forests and erode the plains. Most of the country, including this northern portion, is semi-arid. Off the north coast of Haiti, the island of Tortuga or as referred to by the Haitans, the ‘Island of Torture’ is visible. The island is 25 miles (40 km) long and covers an area of 70 sq. miles (180 sq. km). Near the lower center of the image, a portion of the mountainous, barren Gonave Island is discernible..
Source: National Aeronautics and Space Administration - NASA/JPL/NIMA